12 Days of Christmas: The Gift of Real 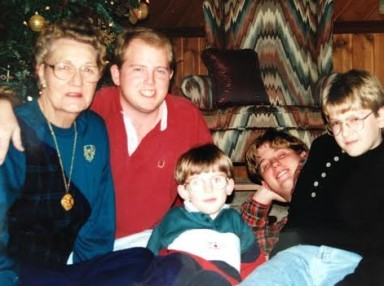 Christmas  1995: My nephews Craig, Phillip and  Michael, son Brennen and their grandmother, my mom, the unforgettable Mary Louise

I was twelve years old when the first of my three nephews was born. Just old enough to command a little respect from them, I suppose, but not so much older that I seemed completely out of touch. In the early years of my adult life (post-college, newly married, pre-children), I recall feeling suddenly empty and unsatisfied giving them traditional Christmas gifts of Best Buy and Radio Shack gift certificates, model car sets and board games.  One year, I announced that I’d had enough, there would be no more traditional gift-giving from their Aunt Susie and instead, we’d share a memory, an evening or event spent together creating memories that I hoped would last a lifetime.

You’d think they’d be disappointed at their loss of material goods but they were ecstatic!

For nearly ten years, we did something different each year. There were sleepovers, laser tag, movies and roller skating. Occasionally, their young cousin Adrienne would go with us and in the later years, my own son joined us in our activities. One year we attended the Winston-Salem School of the Art’s production of the Nutcracker Ballet, where the youngest, Michael had to be repeatedly nudged awake. They still tease me about the year we bundled up in mittens and parkas for a winter hike in the mountains, only to arrive to find our destination closed. We ate our picnic in the car with the defrost set on high. There’s a photo somewhere of the four of us laughing and clinging on the park’s entry gate with the “CLOSED” sign prominently displayed.

Today, not a year goes by that we don’t reminisce about those good times.

Traditions change. Like many families, our Southern family has expanded into a cultural hybrid that extends to the nether regions across oceans and above the Mason- Dixon line. Eventually, these boys came to our family Christmas gathering with the young women who would become their wives. The girls, of course, having their own families and traditions, brought a new dynamic to the group. Suddenly, our new “family” extended from the country roads of Davidson County to Boston to Greek immigrants from Brooklyn, New York.

On this most memorable of Christmases, my country niece Melissa, an animal-lover and now a committed veterinary technician, happened to walk into the kitchen with a live squealing baby pig, right at the exact moment my Brooklyn- Greek niece was preparing Tzatziki and lamb skewers. The commotion almost caused Irene to severe her finger! The evening took another turn downhill when my Bostonian niece, Kate’s Irish Catholic father got into a heated disagreement with the Brooklyn contention over Red Socks vs. Yankees. As the sparring continued throughout the meal, Kate’s father, Fran (Side Note: Fran’s family was so extremely Irish Catholic, his parents  named their children after the Kennedy Clan. There was Robert, John, Joe and Rosemary, etc… When the baby came along, they were out of Kennedy names and had to call him Fran!) Caught up in the heat of the moment, Fran unfortunately called my Brooklyn niece an unfortunate “B’ word.  Although my Southern mother was slightly impaired with the early stages of dementia and did not always recognize the faces sitting around her table, she maintained enough composure to realize this action was highly inappropriate. Mother rose to the occasion by shaking a Parkinson’s ridden finger at Fran and telling him to stick it up his…

Well, you get the picture. Sometimes, it’s the years where everything seems to go wrong that are the most memorable, events seared onto your brain with the permanence and burn of a cattle brand.

Today, our Christmas traditions continue to evolve. Each of my nephews married the three young ladies they brought to Christmas that year. They are adult men now, with children and families of their own. Except for the year I thought it would be great fun to buy them Christmas underwear as a gag gift to embarrass them with their new brides, I never bought them traditional gifts again but rather began giving them generous bags of my homemade chocolate chips. I’m not sure if they tell me this just to make me feel good, but it seems to be their preferred gift of the holidays. Their new wives began to threaten me in the early years so they now get their own bag of cookies, exactly the same size as their husbands.

I struggle to keep the meaning of Christmas alive in the hustle and bustle of the holidays. I share my cookies with  neighbors and friends. I treasure the sounds of Christmas: the ringing of bells, change clanging into a Salvation Army pot, the singing of Christmas carols. I love the hugs and greetings of “Merry Christmas” that are exchanged among everyone from friends to strangers.

I especially love the quiet that settles upon my household like snow in the days of late December following Christmas when there’s nothing really left to do but watch a movie and take a nap. If you have a family like mine, you understand that’s really something to appreciate!

I am an interior designer, mother, wife, writer, artist, friend, inspired traveler, and energetic, creative soul who delights in many forms of self- expression. Creativity is a gift from God, and when I use that gift, I am somehow one with God, doing what I do best. Living a creative life is as natural to me as breathing...

7 thoughts on “12 Days of Christmas: The Gift of Real”